For the brave souls out there, once you realize that it’s just VxWorks that’s been… how do I put this… 𝕔𝕦𝕤𝕥𝕠𝕞𝕚𝕫𝕖𝕕… but in the same way that people 𝕔𝕦𝕤𝕥𝕠𝕞𝕚𝕫𝕖𝕕 MySpace pages (a little harsh maybe). After realizing that you might be tempted to see what commands Shoretel implemented or left on their image. This works on the phones too but others have explored that in much more detail and with more competence than I. 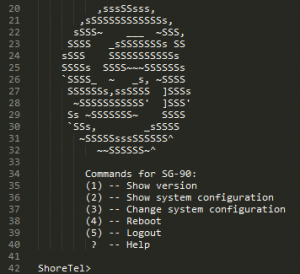 One thought on “Console Access to Shoretel Switches and Phones”